What I did last summer 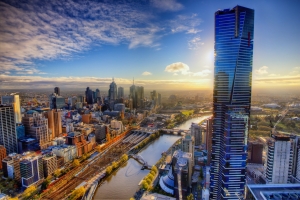 A common topic for school/university kids to write about (when they have forgotten what to write about) is the old favourite, “What I Did Last Summer”. In the case of the Tait family, that was to go to Melbourne for the Boxing Day Test.

The atmosphere and experience was awesome. On the first day there was 80,000 plus people at the game and you could feel that it was a special occassion. The less said about the result the better.

But this was a family holiday and there was only so much cricket that Mrs Tait (and daughter Tait) were going to stomach. We had a week in Melbourne and the other significant reason for going was to do some shopping. And by heck, does Melbourne know how to do shopping. Myer (a large department store) was open from 5am – 11pm on Boxing Day. We ended up doing some shopping at 9.30pm on Boxing Day. Most of the shops were still open then, and there were thousands of people around.

Even son Tait took us to a shop he wanted to go to (Culture Kings). That was more like going to a night club as there was a DJ playing, and all the walls and display stands had very elaborate light displays. But he ended up getting some shoes and a couple of t-shirts so he was very happy.

So, I can safely say that we all had a brilliant time in Melbourne and that shopping in actual shops was enjoyable.

I say this because we, like most other people, also do some shopping online. I wrote an article in winter 2019 about the tax changes to buying items from overseas. From December 1 2019 any package of goods from overseas that cost up to $1,000 will not have GST charged by NZ Customs. But, if the overseas retailer has total sales in NZ of more than $60,000 per annum then they are expected to register for GST and charge GST in sales to NZ. Items over $1,000 will have GST charged and collected by NZ Customs.

And it seems the new rules might be having some sort of impact. It has been reported that the amount of goods being purchased from overseas has gone down a little. This could also be due to overseas sites temporarily not allowing sales to NZ as they work out how to comply with the new NZ laws. It will be interesting to see if this trend continues.